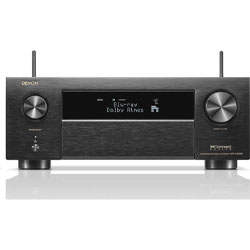 It’s strongly recommended to compare different receivers if you want to choose the best one: Marantz AV8805 vs Denon AVR-X4800H.

The number of channels for receivers is different - 13.2 versus 9.4, respectively, for devices. A common feature for devices is the same total harmonic distortion - 0.08%.

The manufacturer installed different DACs, the AV8805 received the model AK4490 384 KHz/32-bit, but the AVR-X4800H is equipped with 192 KHz/32-bit. Each of the compared opponents supports Bi-amping. Both Marantz AV8805 and Denon AVR-X4800H can transmit an audio signal directly to the amplifier and bypasses any DSP processing. Each of the receivers has a Bluetooth connector. Both devices can work with such Apple Music services: AirPlay, AirPlay 2. Access to the Spotify service is on each of the competitors. The number of available streaming services varies for receivers, the Marantz AV8805 works with Deezer, TIDAL, Pandora, SiriusXM, TuneIn Radio, but the Denon AVR-X4800H works with Deezer, TIDAL, Pandora, SiriusXM, Napster, SoundCloud, Amazon Music, Amazon Music HD, MOOD:Mix. Signaling over HDMI in standby mode can provide the AV8805 and the AVR-X4800H. Each of the devices can increase the resolution of the incoming video signal. Each of the participants of the comparison has a Dolby Vision.

HDMI Audio Return Channel is implemented in both devices. HDMI eARC is supported by the AV8805 and the AVR-X4800H. When comparing receivers, it becomes clear that each of the rivals can work with HDMI CEC. The AV8805 has support for the standard HDCP 2.2, compared to the AVR-X4800H, which supports the standard HDCP 2.3. Like most receivers, our models have a built-in phono stage for connecting a vinyl player.

Ability to create 3 Multi zones inherent in both AV receivers. Voice control is performed using Amazon Alexa, Google Assistant, Siri, Josh.AI in both models. There is an ECO mode in either AV receiver. The Marantz AV8805 and the Denon AVR-X4800H can be properly configured using the setup assistant.