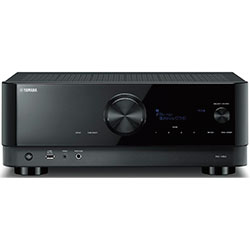 A significant difference between the receivers in the number of channels, Marantz AV8805 has 13.2 versus 5.2 for Yamaha RX-V4A. The THD is 0.08% for the AV8805 but 0.06% for the RX-V4A. Both the AV8805 and the RX-V4A support Bi-amping. Each of the AV receivers can transmit an audio signal directly to the amplifier and bypasses any DSP processing. Rivals from our review have Bluetooth support. The Apple Music service is implemented on considered devices: AirPlay, AirPlay 2. Spotify can be used on each receiver. The AV8805 can work with the audio stream from Deezer, TIDAL, Pandora, SiriusXM, TuneIn Radio, and the RX-V4A can receive a content from Deezer, TIDAL, Pandora, SiriusXM, Qobuz. HDMI signal transmission in standby mode is implemented in each of the devices. Both rivals can scale the resolution of the incoming HDMI signal. The HDR standard - Dolby Vision is supported by these receivers.

The Marantz AV8805 has 8/3 HDMI inputs/outputs versus 4/1 HDMI connectors of the Yamaha RX-V4A.

The HDMI Audio Return Channel (ARC) feature supports both devices. HDMI eARC is available in each model. The Consumer Electronics Control (CEC) feature is present in most modern AV receivers and the models in our comparison are no exception. The AV8805 supports the protection of digital content of the standard HDCP 2.2, versus HDCP 2.3 in the RX-V4A. The AV8805 has a built-in phono stage for connecting a vinyl player. The AV8805 supports voice control via Amazon Alexa, Google Assistant, Siri, Josh.AI, and the RX-V4A - Amazon Alexa, Google Assistant, Siri. It is also worth noting that the ECO mode is presented in each of the receivers. Both AV8805 and RX-V4A can be configured using the Setup assistant.