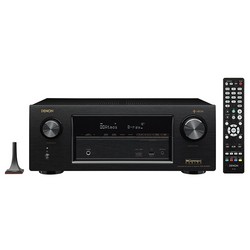 AV receivers under review have the same number of channels. In terms of power, there are differences, the AVR-X3400H has such a ratio W/Ohm - 105/8, 135/6, while the RX-V6A has a power of 100/8. The value of total harmonic distortion is also different, and for the AVR-X3400H it is 0.08%, but for the RX-V6A it is 0.06%. Each of the compared opponents supports Bi-amping. Both Denon AVR-X3400H and Yamaha RX-V6A can transmit an audio signal directly to the amplifier and bypasses any DSP processing. Each of the receivers has a Bluetooth connector. Both devices can work with such Apple Music services: AirPlay, AirPlay 2. Access to the Spotify service is on each of the competitors. The number of available streaming services varies for receivers, the Denon AVR-X3400H works with Deezer, TIDAL, Pandora,iHeart Radio, Sirius XM, Sound Cloud, Napster, but the Yamaha RX-V6A works with Deezer, TIDAL, Pandora, SiriusXM, Qobuz. Signaling over HDMI in standby mode can provide the AVR-X3400H and the RX-V6A. Each of the devices can increase the resolution of the incoming video signal. Each of the participants of the comparison has a Dolby Vision.

HDMI Audio Return Channel is implemented in both devices. HDMI eARC is only supported by the RX-V6A. When comparing receivers, it becomes clear that each of the rivals can work with HDMI CEC. The AVR-X3400H has support for the standard HDCP 2.2, compared to the RX-V6A, which supports the standard HDCP 2.3. Like most receivers, our models have a built-in phono stage for connecting a vinyl player.

has not
Dolby Digital Plus, Dolby Atmos Height Virtualization