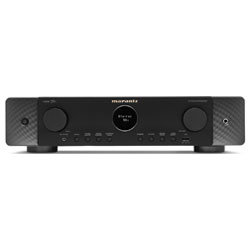 The present review is aimed to compare two AV receivers - Marantz NR1711 vs Marantz CINEMA 70s that are meant to satisfy the needs of cinema and music lovers.

Considered AV receivers have the same number of channels 7.2. And as for power, it is the same and equal to 50/8, 70/6. The THD is the same and is 0.08%. Both the NR1711 and the CINEMA 70s support Bi-amping. Each of the AV receivers can transmit an audio signal directly to the amplifier and bypasses any DSP processing.

WI-FI modules have the same characteristics: 2.4/5GHz. Rivals from our review have Bluetooth support. The Apple Music service is implemented on considered devices: AirPlay, AirPlay 2. Spotify can be used on each receiver. The NR1711 can work with the audio stream from Deezer, TIDAL, Pandora, SiriusXM, Napster, SoundCloud, and the CINEMA 70s can receive a content from Deezer, TIDAL, Pandora, SiriusXM, Napster, SoundCloud, Amazon Music, Amazon Music HD, MOOD:Mix.

Compared AV receivers retain the quality of 4K/120Hz signal when transmitting from a source to a TV or projector. HDMI signal transmission in standby mode is implemented in each of the devices. Both rivals can scale the resolution of the incoming HDMI signal. The HDR standard - Dolby Vision is supported by these receivers.

Each receiver has 6/1 HDMI inputs/outputs.

Each of the AV receivers from our review supports 2 Multi-room zones. Supported voice control technologies are identical - Amazon Alexa, Google Assistant, Siri, Josh.AI. It is also worth noting that the ECO mode is presented in each of the receivers. Both NR1711 and CINEMA 70s can be configured using the Setup assistant.