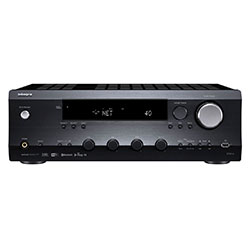 It makes sense comparing Sony STR-DH590 vs Integra DTM-6 because they both are able to give some premium features.

Characteristics of digital to analog converter (DAC) are different, 192 KHz/32-bit for STR-DH590 and AK4438 384 KHz/32-bit for the DTM-6. None of the models support Bi-amping. The Sony STR-DH590 can transmit an audio signal directly to the amplifier and bypasses any DSP processing. Rivals from our review have Bluetooth support. Only the DTM-6 supports Spotify. Only the STR-DH590 provides HDMI signal transmission in standby mode. Both competitors are not able to scale the HDMI signal. Dolby Vision technology found support only on the STR-DH590. Only the STR-DH590 supports HDMI Audio Return Channel (ARC). Unfortunately, HDMI eARC is not available on monitored devices. Of the two receivers in our comparison, HDMI CEC is present in only the STR-DH590. The DTM-6 has a built-in phono stage for connecting a vinyl player. An ECO mode is not present in each of the AV receivers. Unfortunately, the setup assistant is not available in each of the models.

has not
WRAT, Hi-Res audio

Dolby Digital
has not