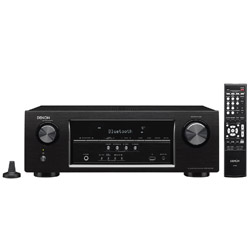 Having had an opportunity to test Denon AVR-S510BT vs Onkyo TX-NR545, I’d like to share my impression here to facilitate your choice of a new AV receiver.

The manufacturer installed different DACs, the AVR-S510BT received the model 192 KHz/32-bit, but the TX-NR545 is equipped with Hi-Grade 384 KHz/32-bit. The Bi-amping function is implemented only in the Onkyo TX-NR545. The model TX-NR545 can transmit an audio signal directly to the amplifier and bypasses any DSP processing. Each of the receivers has a Bluetooth connector. The TX-NR545 has access to the Spotify service.

Support for the HDR function can only boast of the TX-NR545. The quality of 4K/60Hz signal remains unchanged when transmitting from a source to a TV or projector via HDMI for both receivers. Signaling over HDMI in standby mode can provide the AVR-S510BT and the TX-NR545. None of the devices can increase the resolution of the incoming video signal. Review participants do not have the Dolby Vision feature.