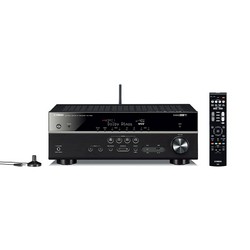 Having had an opportunity to test Yamaha RX-V581 vs Onkyo TX-NR545, I’d like to share my impression here to facilitate your choice of a new AV receiver.

The manufacturer installed different DACs, the RX-V581 received the model Burr-Brown 192 KHz/24-bit, but the TX-NR545 is equipped with Hi-Grade 384 KHz/32-bit. Each of the compared opponents supports Bi-amping. Both Yamaha RX-V581 and Onkyo TX-NR545 can transmit an audio signal directly to the amplifier and bypasses any DSP processing. Each of the receivers has a Bluetooth connector. Both devices can work with such Apple Music services: AirPlay. Access to the Spotify service is on each of the competitors. The number of available streaming services varies for receivers, the Yamaha RX-V581 works with Pandora, JUKE, but the Onkyo TX-NR545 works with Tunein Radio.

Support for the HDR function can only boast of each of the AV receivers. The quality of 4K/60Hz signal remains unchanged when transmitting from a source to a TV or projector via HDMI for both receivers. Signaling over HDMI in standby mode can provide the RX-V581 and the TX-NR545. None of the devices can increase the resolution of the incoming video signal. Review participants do not have the Dolby Vision feature.

HDMI Audio Return Channel is implemented in both devices. HDMI eARC is not supported by the RX-V581 and the TX-NR545. When comparing receivers, it becomes clear that each of the rivals can work with HDMI CEC. RX-V581 and TX-NR545 support the standard HDCP 2.2. Unlike most receivers, our models do not have a built-in phono stage for connecting a vinyl player.

Ability to create 2 Multi zones inherent in both AV receivers. Voice control of the basic functions of the receiver is not realized in both models. There is an ECO mode in RX-V581. The Yamaha RX-V581 and the Onkyo TX-NR545 can be properly configured using the setup assistant.

A Dolby Atmos multichannel audio format is available both models. Only in the RX-V581 realized a DTS:X surround technology.