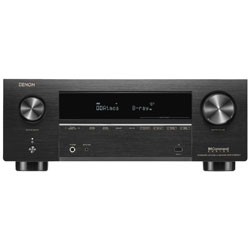 WI-FI modules have the same characteristics: 2.4/5GHz. Rivals from our review have Bluetooth support. The Pioneer VSX-LX303 has support for AirPlay, and its competitor in our comparison - AirPlay, AirPlay 2. Spotify can be used on each receiver. The VSX-LX303 can work with the audio stream from Deezer, TIDAL, Pandora, TuneIn Radio, and the AVR-X3800H can receive a content from Deezer, TIDAL, Pandora, SiriusXM, Napster, SoundCloud, Amazon Music, Amazon Music HD, MOOD:Mix.

The HDMI Audio Return Channel (ARC) feature supports both devices. The HDMI eARC is available only on the AVR-X3800H. The Consumer Electronics Control (CEC) feature is present in most modern AV receivers and the models in our comparison are no exception. The VSX-LX303 supports the protection of digital content of the standard HDCP 2.2, versus HDCP 2.3 in the AVR-X3800H. These compared receivers have a built-in phono stage for connecting a vinyl player.